These days, Hollywood seems to be going crazy over birders. So crazy, in fact, that we've had TWO whole movies made in our honor, The Big Year and A Birder's Guide To Everything, in the past few years. Unfortunately, these movies tend to flop when it comes to making money. Since we still believe we should spread the good word of birdophilia, we have suggested five excellent movie ideas to Hollywood's finest writers and producers. We drew inspiration from some already-popular movies to reach a wider audience. Here are our ideas: 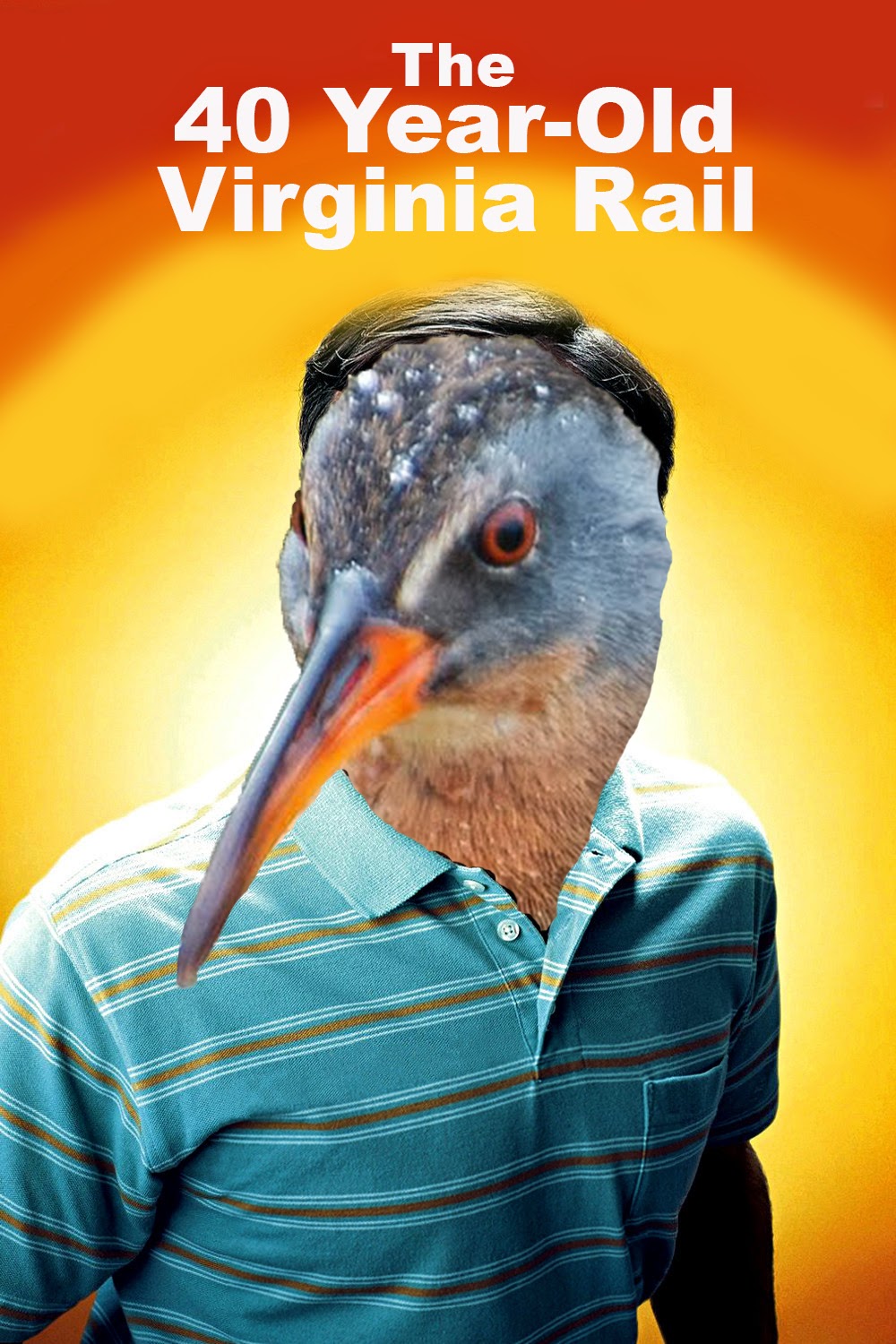 The 40 Year-Old Virginia Rail is a lighthearted comedy about an awkward old Virginia Rail who has yet to mate. Helped along by his good friends, Sora and Marsh Wren, he undergoes a transformative journey to discover himself, and what it means to be a rail. And he gets laid. 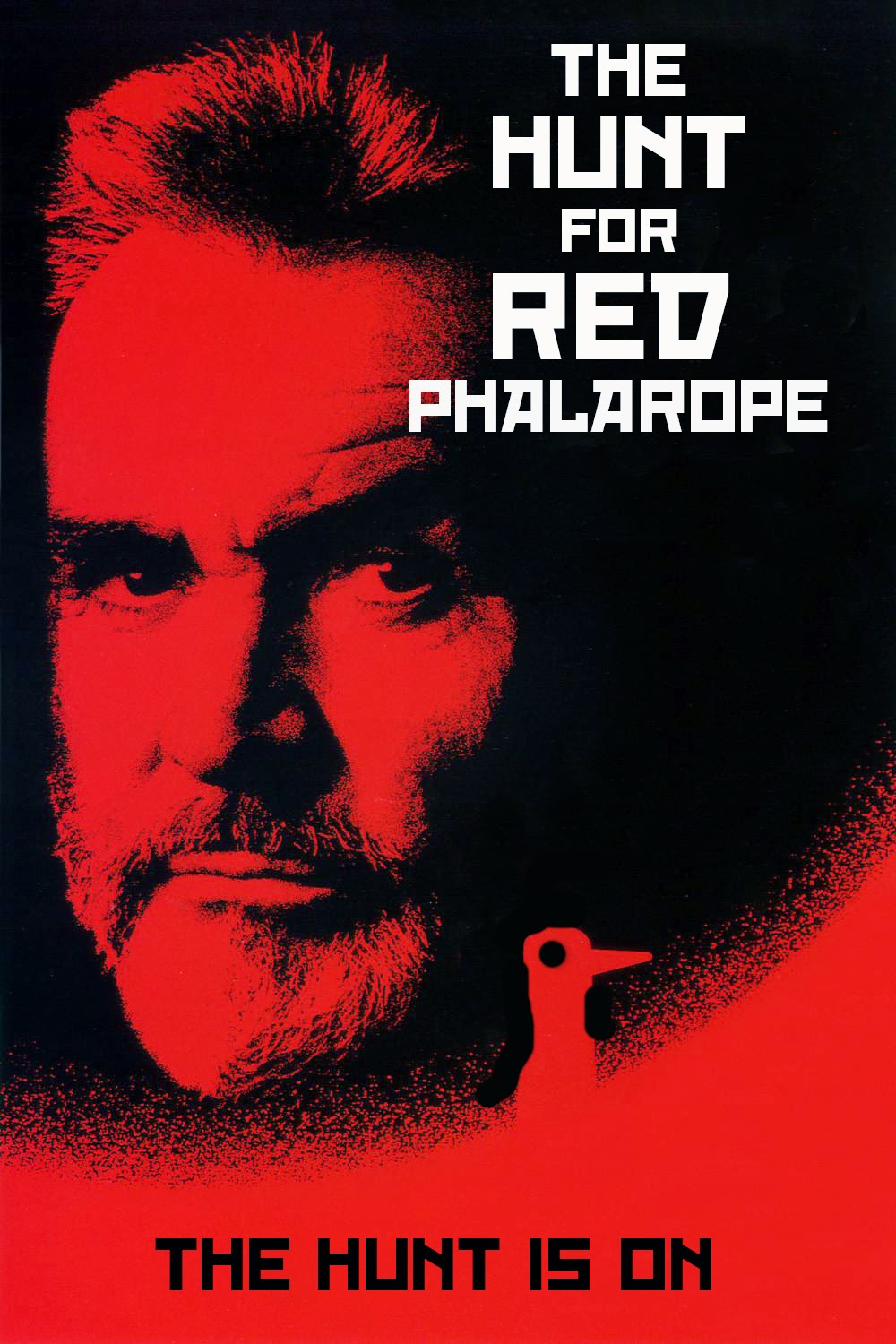 The Hunt for Red Phalarope
A Soviet nuclear submarine captain becomes obsessed with birding amidst the height of the Cold War. He risks life and limb to find his pelagic nemesis - the Red Phalarope. His insatiable quest ultimately places him in the last place imaginable - the Atlantic coast of the United States. 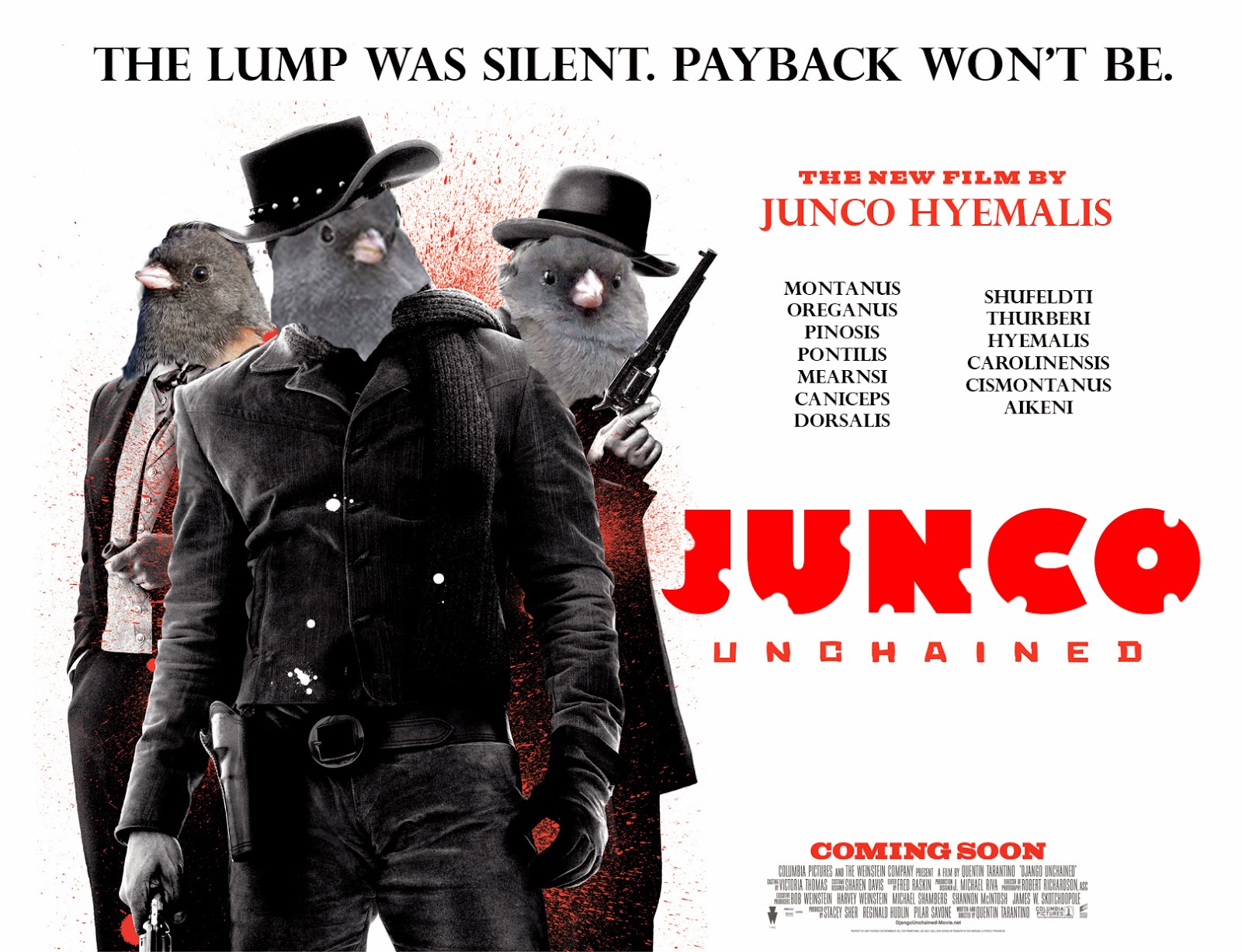 Junco Unchained
Forced into subversion by the American Ornithologist's Union, a conglomeration of Oregon and Pink-sided Juncos must fight for their independence against the tyrannical nominate hyemalis Juncos. This rip-roaring and violent comedy will leave quite an impact on any audience. 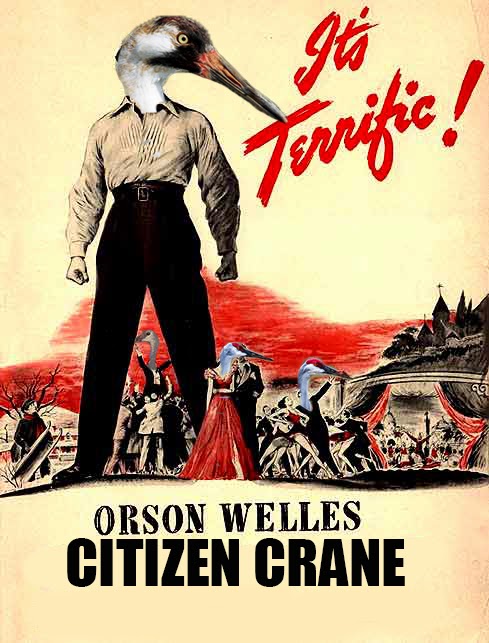 Citizen Crane
On his deathbed, a Floridian Whooping Crane re-lives his life through a series of flashbacks from meeting his mate to his childhood migration through Colorado. Though estranged from the local population, the story of his life ends up bringing the Sandhill and Whooping Cranes of central Florida closer to each other as they all realize the struggles of being threatened. 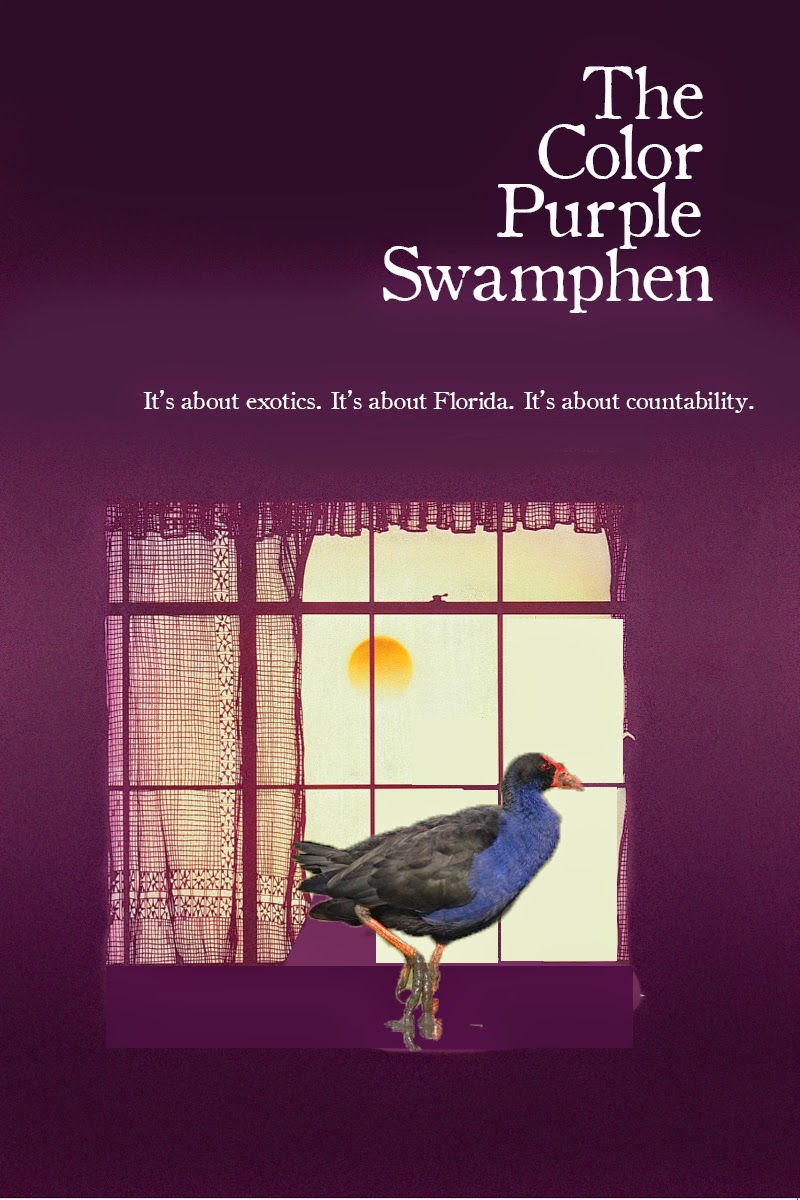 The Color Purple Swamphen
This movie chronicles the life of a Purple Swamphen in the American South being subjected to ridicule and oppression from the ABA due to her status as an exotic. Eventually, however, she is transformed into a countable species and finds strength in her new status.

We personally think that these movies could make millions. What bird movies have you seen lately? Are there any that you'd love see get made? We'd love to hear from you.
Posted by Unknown at 5:18 PM 6 comments:

Why Can't The Weather Be Worse? and Other Meteorological Musings

North Carolina has pretty much had a perfect year in terms of weather. Sure, we had a few days that didn't get above freezing back in January, but overall it's been comfortable. The summer wasn't hot, we got more than enough rain, and the sunshine was almost always out. No droughts, no severe weather. Just about perfect. Unless you're a birder.

As a Piedmont-bound avian enthusiast, I always hope for two things: hurricanes and droughts. This is backwards. This is wrong. This might make me a terrible person. But it's the truth. I have yet to experience real hurricane birding. Instead, I find myself salivating over the post-Fran and Ernesto lists from several years ago. I thought I would finally get my chance this year, as Arthur barreled toward the coast. But the bastard curved away, sparing the coast from damage but also sparing my list from a bird or two. I scoped the ocean for hours, and all I got was a shearwater sp.

I'll be honest - I'm an obsessive county lister. It's a fact. And nothing would improve my Wake County list (my home county, also where Raleigh is for any out-of-staters) more than a few big mudflats and a strong tropical cyclone. This list's rate of expansion has ground to a near halt, save for the occasional fall warbler. Bring on the storm-petrels, the Pterodromas, the sooty terns; the American Golden-Plovers, the Ruffs, the phalaropes. I need them.

This brings me to my second gripe with this weather - the rain. Every rain shower keeps some shorebirdy mudflat underwater. In my pre-birding days, back in elementary school, it seemed like every year was a drought. The mudflats, I hear, were nothing short of epic. Even last year saw a dry enough spell to produce two Baird's Sandpipers at Lake Crabtree's ephemeral mud island. But this year, it's rained too damn much. The reservoirs are more than full, making city officials happier than Pine Siskins at a thistle feeder, but leaving me shorebirdless. Is it too much to ask for a dry spell each Fall Migration for my plovers and sandpipers to show up? I don't think so.

Why has the weather been simultaneously great and terrible this year? I blame El Niño, the famed climatic event centered around the Eastern Pacific. This giant pool of hot water off the Peruvian coastline gives the Pacific jet stream a straight trajectory across the North American continent. This shears and pushes away any hurricanes trying to form in the Atlantic, and brings above-average rainfall to the southern half of the country. How annoying.  It might make West Coast birding a little more exciting, but it certainly does nothing to help out North Carolina birders like me.

Now let's just hope for a brutal winter, which the four-lobed Polar jet stream should give us. I could go for some nice waterfowl right about now.
Posted by Unknown at 8:00 PM No comments:

NFCs- An Expert's Perspective, from a Very Special Guest

Nocturnal Flight Calls: the most accurate and conclusive method of identifying species of thrush, warbler, sparrow, rail, etc. during migration, or any time of year, for that matter. Through many years of intensive research, Dr. N. Seeper has formulated a multitude of theories associated with Nocturnal Flight Calls. Read his in-depth account here, a Birder's Conundrum special guest! Note: We here at TBC do not condone the information presented here, nor do we agree with it.

Dear birders: I am here to clear something up. I have been slighted, intimidated, and belittled by some members of the birding community, and some of these members are professional people. I will have you know that I can be considered a true expert due to my prestigious education as a former student athlete at UNC-Chapel Hill. I know very little of NFC. But in my 18 years of living with NFC, I have learned their ways. Let me teach you all about NFC - so here, eat this!

Theory One: The Thrushold means you got a thrush!
Formerly known as the Thrushhold, the AOU Committee on Words recently voted to take out the second "h" saying that it was "unnecessary" and that it "made the word look made-up." Anyway, The Thrushold is the most important theory that I have developed. After poring over hours and hours of spectrograms, I have deduced that there is a threshold of sorts delineating thrushes from other migrants. The dark band of white noise located between 4 and 5 kHz acts as the dividing line between all thrush NFCs and all non-thrush NFCs. To put this into one definitive statement: If a call lies beneath the 4-5 kHz thrushold, then it is a thrush, if it lies above the thrushold, then it is not a thrush and is probably a warbler, sparrow, heron, trogon, owl, etc.

Theory Two: Light Rain means a good night for calls!
View the map below. Those clusters of green are a smattering of light showers picked up by the Doppler radar. This amount of light rain directly corresponds with heavy migration and, therefore, good flight calls. However, this is not only true during migration. Any time there is light rain, there will be beautiful migration and abundant flight calls, even if the rain occurs in February. It seems that much of this rain (rather mysteriously, I might add) does not make it to the ground, and the stars are even visible! It is a strange effect that I have a hard time explaining.

P.S. I definitely recommend purchasing The Guide to the Common Towhees of the Carolinas and Virginia - I love that book! I use it for all of my towhsss identification problems when I visit NC!
Posted by Unknown at 9:16 PM 2 comments: